How Europe is creating the future of eMobility: Insights from the AVERE eMobility Conference

AVERE, the European Association for eMobility, hosted its annual eMobility Conference in Brussels in October 2018. Over a two-day period, the conference drew hundreds of mobility, energy, and sustainability experts from across the globe to listen to speakers and network with industry professionals on how to collectively drive the future of electric mobility forward in Europe and around the world.

Founded in 1978, AVERE is forum that allows a European network of members—from academic researchers to NGOs and car manufacturers—to exchange knowledge, experience, and ideas. The objective of AVERE is to create a strong electric mobility industry, clean and healthy cities, and to free modern society from dependence on fossil fuels. Here are some of the biggest insights on how policy makers, in collaboration with researchers and business representatives, can create the future of electric mobility in Europe and globally.

The three barriers to adoption of electric mobility are: high purchase cost, driving range, and infrastructure

One of the main barriers of entry into electric car ownership is that the purchase price of electric cars is still considerably higher than that of traditional petrol internal combustion engine (ICE) cars, typically even with government subsidies. What fewer people are aware of, however, is that the long-term ownership and operation of an electric car becomes less than that of an ICE over time, considering that charging costs are substantially lower than fueling costs, and that there are further government subsidies such as exemptions in vehicle registration or road tax.

The main reason electric cars currently cost more than ICE cars is the price of the battery that powers electric cars. Battery technology is not yet advanced enough to meet the demands of electric driving, and batteries are still very expensive to produce. This is a well-known issue in the electric mobility sector, and large amounts of R&D are going into improving battery technologies, so we can expect prices to drop exponentially in the near future.

Another major barrier to the electrification of mobility is that electric vehicles are not yet able to achieve nearly seamless long driving distances due to the time it takes to “refuel” an electric car. Even though battery technology has started to match the driving distance of a single tank of gas, the charging time of an electric vehicle is still considerably longer fueling a gas tank. Fear that one’s car may run out of power before reaching one’s destination is known as “range anxiety.”

Improving battery technology and creating better infrastructure for electric vehicle charging are two ways to overcome range anxiety. Another is the adjustment of driving habits. As much as people needed to adjust from horse-drawn carriage to personal vehicles that require fueling, the transition to electric mobility can be made easier with an adjustment of mindset. Considering electric vehicles currently have a top range of approximately 500 km, it’s not unreasonable to expect to take a coffee or lunch break after driving such a distance, which is a great opportunity to charge up.

Dramatic improvements in technology and infrastructure have been made in the past century, almost entirely centered on the ICE car. Infrastructure on such a massive scale is difficult to change. In addition to both public and private entities setting aside large budgets to install and maintain charging stations, such entities providing charging stations must work in accordance with demand from electric vehicle drivers as well as energy suppliers to ensure there is enough electricity supply to draw from the grid. Thankfully, the global power generation is expected to rise in accordance to demand even from a massively increased number of EVs compared to today, with solar and wind generation expected to grow 5-10 times fast than gas.

Furthermore, reliance on the ICE car has created deeply ingrained habits in the global population on how transport should work. For example, personal passenger vehicles are driven on roads, fueled in minutes at gas stations, and parked at home, work, or on the street. To successfully change such a large social system of habit is difficult. Car-sharing giants such as Uber or Car2Go have managed to challenge and change previously held notions that passenger vehicles are almost strictly private-owned. And from such successes, these car-sharing brands have become known as tech unicorns. 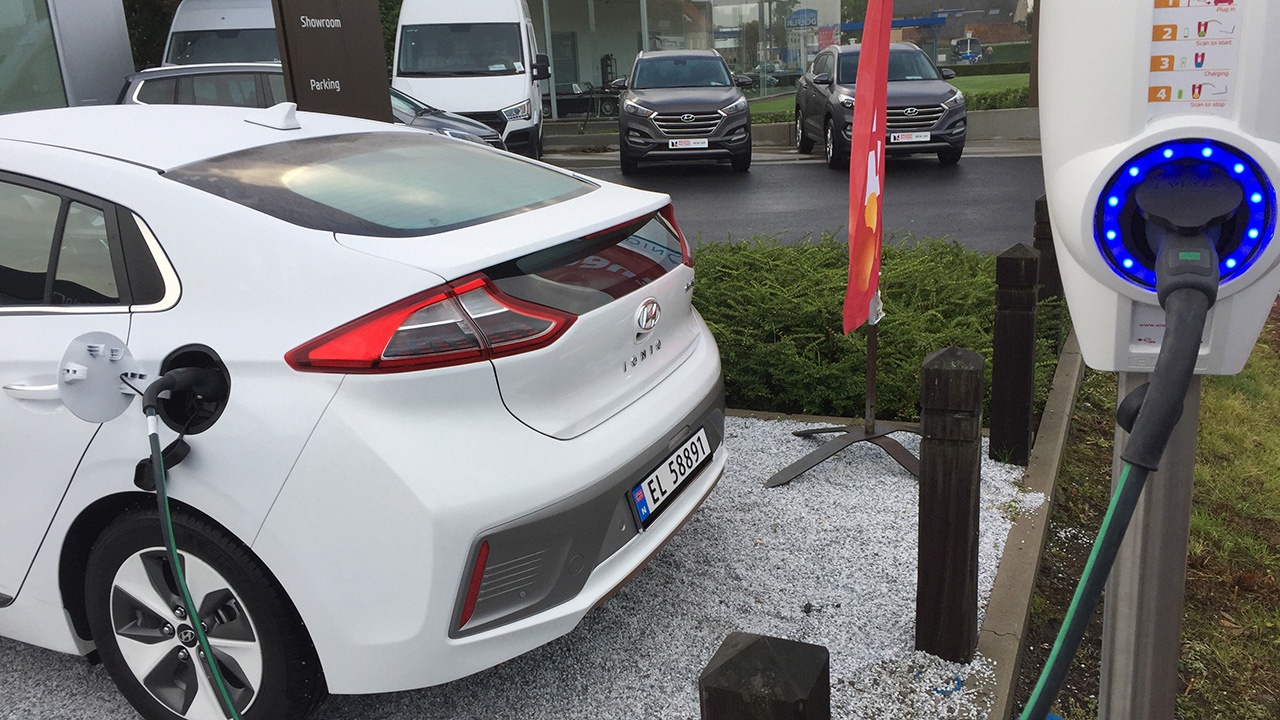 Today, there is a catch 22 situation in balancing the supply and demand in electrifying transportation. It is difficult to advance one without the other, therefore there must be cohesive plans to develop both the supply side (infrastructure) and the demand side (electric vehicle drivers) concurrently. On one hand, governments must justify the cost of installing enough charging stations that people feel comfortable about switching to electric, on the other hand, electric vehicles must become less costly to purchase in order to lower the barrier to entry so there are more EVs on the road, thereby generating demand for charging infrastructure.

When considering typical movements of the 9-5 workforce, it can be expected that vehicles will be plugged at the workplace around the start of the workday, and at residential dwellings at the end of the workday. With the amount of EVs on the road as of the present, the load on the grid is manageable, however, improved Smart Charging functionalities are necessary in the future in order to balance grid loads in accordance with vehicle owners’ needs. 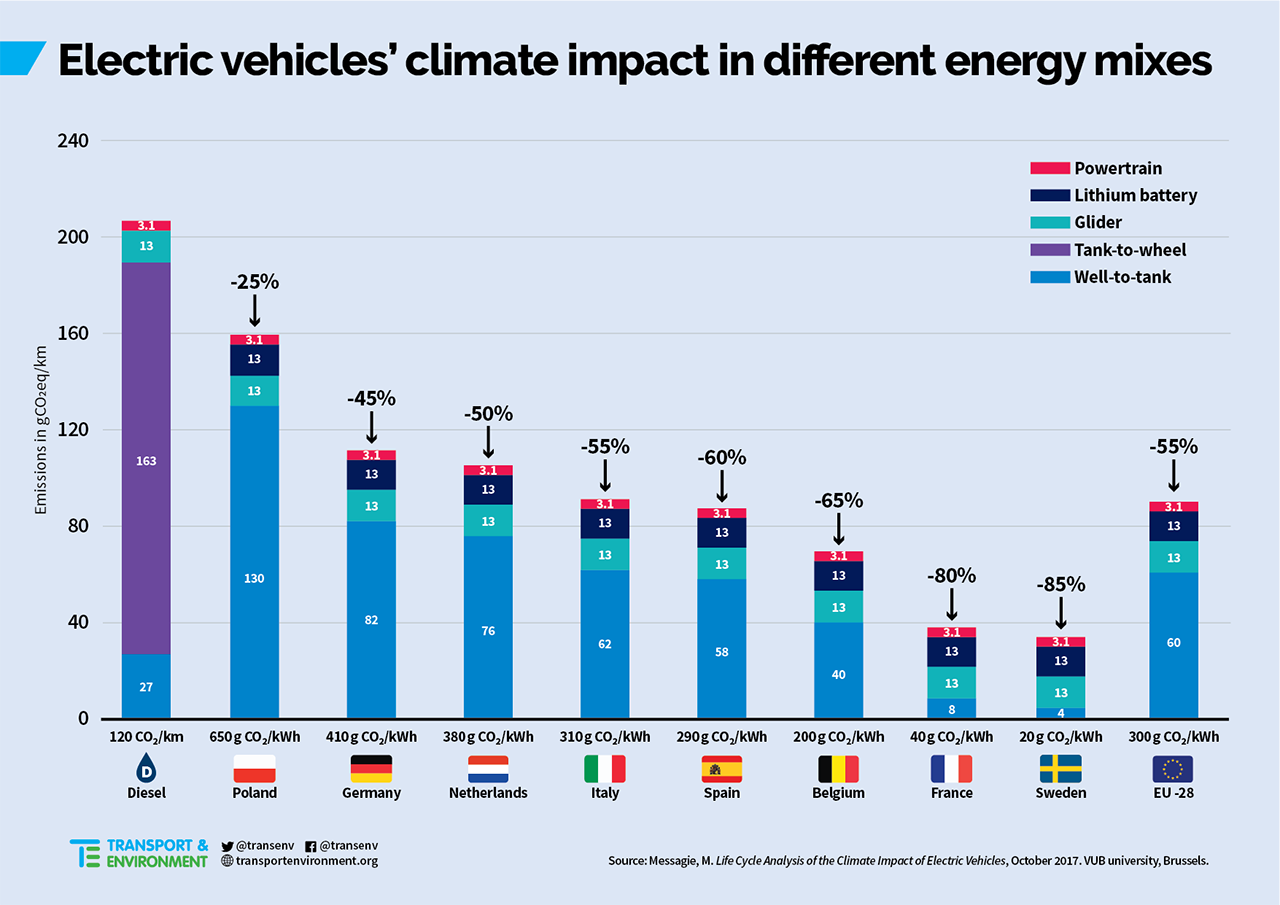 One of the most often-heard arguments against the sustainability of electric vehicles is that the way the electricity is produced still creates high amounts of pollution. This is a known issue in the sustainable energy sector and considerable R&D is being conducted to ramping up existing clean electricity generation processes and creating new processes, such as with the vehicle-to-grid (V2G) model. In this model electric vehicles are able to generate their own electricity and sell demand response services back to the power grid, allowing for a more circular energy economy.

A major reason for the present-day success of the electrification of the Norwegian fleet is because the Norwegian government has been offering various incentives to accelerate the transition to electric mobility. Present-day incentives remove one of the major barriers to entry: electric vehicle purchase price. The purchase tax exemption for all-electric vehicles make the EV purchase price comparable to that of ICE vehicles. The end result is that Norway was able to achieve its climate target for average fleet CO2 emissions for new passenger vehicles three years earlier than originally pledged.

We are on the brink of another mobility revolution

With success stories in countries such as Norway, the profile and influence of attendees, the AVERE eMobility Conference concluded on an optimistic note. Attendees left energized and excited that the future of electric mobility is imminent in Europe and around the world.

Learn more about the future of eMobility here.

Discover some of the most popular electric cars (coming) out in 2023 and learn exactly how long it takes to charge them.