The Tesla Model 3 is here at last. A lucky few took it for a spin, and it did not disappoint. Volvo also made headlines when the company announced it would aim for 50% of its sales to be made up of fully electric cars by 2025. A bold move which we hope will influence other car manufacturers in the next few years.

Based on the number of new electric cars that launched in 2017 alone, it seems like many of them have already gotten the message. Bloomberg just bumped up its 2040 forecast for the global EV market share from 35% to 54%. Part of this most likely resulted from ambitious plans by France and the UK to ban all petrol and diesel vehicle sales by 2040.

It's safe to say that the era of electric mobility is upon us. So to kick off these electrifying times, we've made a shortlist of the best upcoming electric cars that'll hit the European and North American market by 2021. 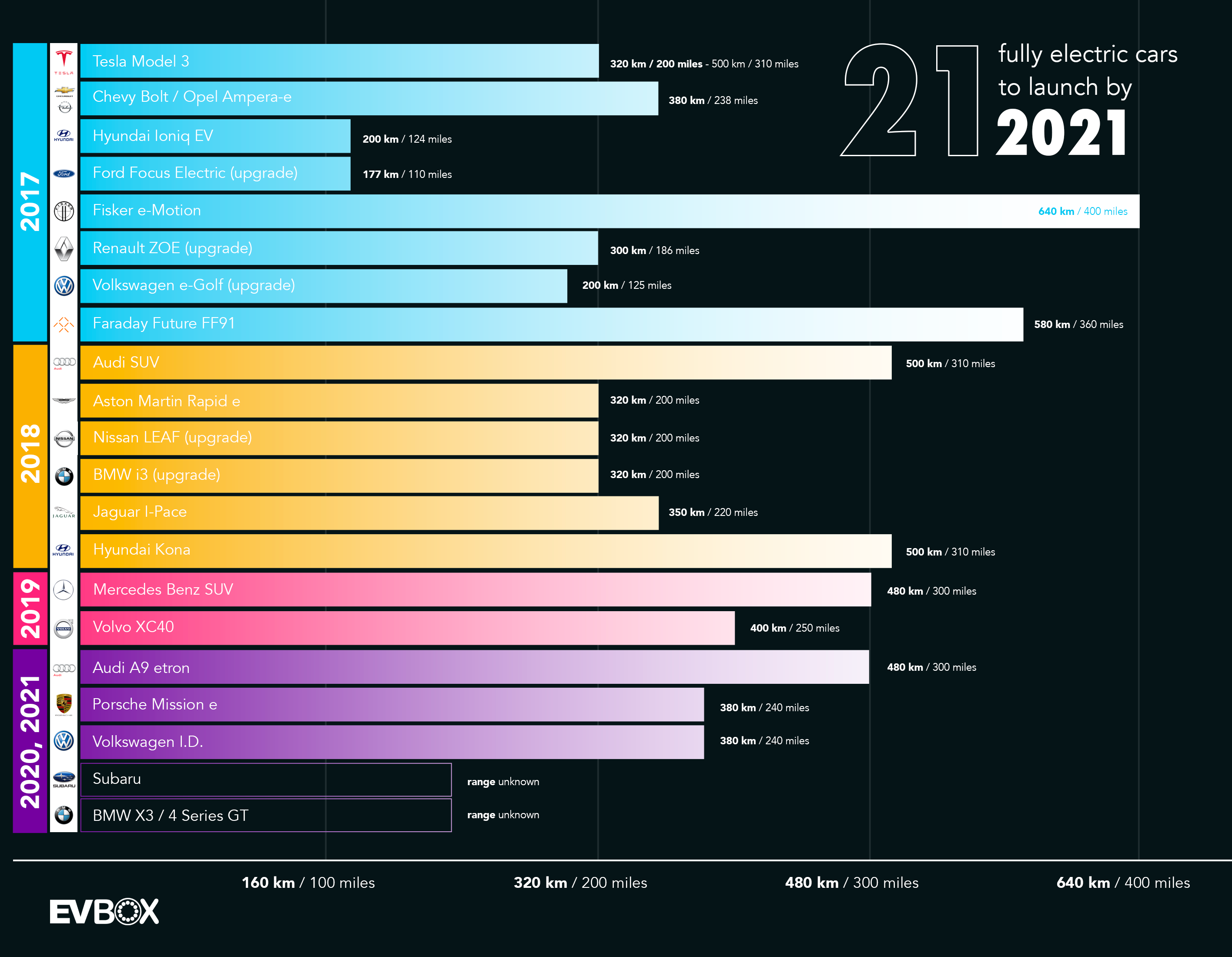 Tesla has finally rolled out its first production version of this long-anticipated car. The first pre-order customer in line actually gave up his spot to Elon Musk as a birthday present. The Premium Range model, which reaches 500 km/310 miles for just $44,000, actually has the cheapest price per range ever! (P.S. this handy little infographic lays it out for you). So one thing's certain, the age of electric cars has officially arrived.

2017 has been a winning year for Chevy Bolt. Acclaimed with numerous awards, Chevy Bolt is seen as the biggest contender in the race to mass adoption of (actually affordable) long-range electric cars. Its European counterpart, Opel Ampera-e, has already started selling in Europe.

Hyundai, which has long championed fuel-cell vehicles, has been under pressure to compete more vigorously in the battery electric market stimulated by Tesla. So in 2017, Hyundai showed off a full line of electrified Ioniqs at the Geneva Motor Show. The fully-electric model is already on the roads in Europe and the US.

Back in 2015, Ford announced it wanted to build 13 new (plug-in) hybrid and fully electric cars by 2020. The first to lead the charge was the Ford Focus Electric, which was upgraded in 2017. The new fully electric Mustang Mach-E is slated to become available before the end of this year.

After a few bumps in the road, Henrik Fisker aims to make his comeback with a bang. The first production model of his ultra-luxury sedan, Fisker e-motion, is expected to be released in 2021.

ZOE remains the best-selling fully electric car in Europe for yet another year. The 2017 ZOE comes with an even better range. It's now available for orders  across Europe.

The 2017 e-Golf was given a range boost from 190 km to 300 km! While some suggest that the e-Golf may slowly disappear once the new Volkswagen I.D. hits the stores later this year, others report that VW's latest Gen.E concept may very well be the preview of the next e-Golf...

This mysterious car startup revealed its first concept car at CES back in 2016. Yet it was one that many believed was unlikely to go into production. At CES 2017, FF showed off its first production vehicle FF91, a crossover SUV. It'll likely fall in the same price range as a Tesla.

This is Jaguar's very first fully-electric car. The production version first hit showrooms in 2018 but, since then, the company has continued to release annual updated versions. Judging by its performance and terrific looks, it seems like Jaguar I-Pace will likely become the first real competition for Tesla’s Model X.

Because they're simply the most practical (family) cars, another electric SUV is rolling in. The Kona Electric was launched in 2018 and is one of the best electric SUVs out there.

Audi released its first fully-electric SUV, e-tron, in 2019. It was heavily inspired by Audi's e-tron quattro concept, which was unveiled at the Frankfurt Motor Show in 2017. Audi fans are now awaiting the release of the new Audi Q4 Sportback e-tron in 2021.

James Bond is always ahead of his time. But it took a while for Aston Martin to finally develop a fully-electric car. Teaming up with the Chinese tech firm LeEco, RapidE was revealed in 2019. However, it was decided this year that the car will not go into production and instead will remain a research project for the company's broader electrification program.

Undeniably the most seasoned electric-car maker of this bunch. The 2020 LEAF has a range of about 270 km / 168 miles per charge. But there’s speculation that the automaker will roll out a new, upgraded LEAF in 2021.

Since the BMW i3 launched in 2013, it's become a favorite among EV drivers. With increased demand, the company has released a number of upgrades, including versions with a longer range and subtle styling updates. The latest 2020 BMW i3 has a range of 246 km / 153 miles per charge.

At the Paris Motor Show last year, Mercedes showed off its Generation EQ concept car, an electric SUV (yep, there it is again). This concept was released in Europe in 2019 and is expected to be launched in the US and Canada in 2021.

Volvo revealed its first fully-electric car the XC40 Recharge in October 2019 with a number of cutting edge new features, including an infotainment system based on Google’s new embedded Android Automotive software. Although inspired by Tesla, Volvo's entrance to the fully-electric market may just pose a threat to the company...

In addition to the Audi SUV launched in 2018, Audi has also kickstarted a fully-electric luxury sedan expected to be released in 2024. The A9 eTron is Audi's take on Tesla's Model S. Reportedly, this car will also feature autonomous driving. Audi's chief announced the company plans to have 25% of all Audi cars powered by batteries.

Who said sports cars can't have silent motors? Porsche, the mother of all sports cars, has invested some $1.09 billion in new facilities to begin production of its first all-electric car. The Mission e went into production in 2019.

Trying to recover from Dieselgate, Volkswagen promised to deliver more than 30 electric cars by 2025. At the Paris Motor Show in 2016, Volkswagen showed off its ID. concept car, yet another electric SUV. The final version was then unveiled at the 2019 Frankfurt Motor Show. The first deliveries will be made this September for the European market.

In an interview with Bloomberg in 2017, the CEO noted that Subaru simply intended to offer plug-in hybrid versions of existing models. The company was therefore not expected to take any big leaps until battery prices lowered. However, it appears this line has changed now as the company prepares to unveil its first fully electric car, Evoltis, in 2021.

BMW has scrapped their i5 plans and will now focus on electrification of other series models like the X3 and 4 Series GT. The latter will be BMW's take on Tesla's Model 3 and is expected to launch in 2021.

Subscribe to our monthly updates about the latest in clean tech and electric mobility.

Follow us on Twitter and Facebook for all things exciting in sustainable tech and transportation. For the EV savvy amongst us, share your thoughts on the latest industry developments on LinkedIn.
No time to read? Tune in on Instagram and YouTube for a peek into the wondrous world of EVBox & electric mobility.

We take a look at Sushil Reddy's trip around India in an electric rickshaw, and discuss what this means for eMobility in India and the rest of the world.

Updates right from the beating heart of the clean tech industry

Subscribe to the EVBox Newsletter for the latest updates, articles, and opinions on all things electric mobility