The idea that tackling the climate crisis will require a change in habits around the world is not something new. Sure, making drastic changes last century would have been ideal, but it’s better late than never when it comes to creating a sustainable future.

It has been roughly a year since Sushil Reddy, along with Sudheer, Pallavi, and Ruthvik embarked on a journey around India’s Golden Quadrilateral—something that wouldn’t be advised right now given the current situation. The preparation for this journey, as well as encounters along the way, show that awareness is key when it comes to the widespread adoption of eMobility. Read on to take a look at what we learned from Sushil’s enterprising EV adventure.

1. Education is key when it comes to adopting EVs

India is home to some of the world’s most polluted cities—and according to IQAir, India is the fifth most polluted country in the world. There are roughly 7 million three wheelers in India today, and this number is expected to increase to 66 million by 2050. Therefore, a lack of awareness surrounding alternative transport and the technology behind it was cited by Sushil as one of the reasons for undertaking this journey.

Offering an alternative to the petrol powered auto rickshaw used widely across the country is something that needs to be done as soon as possible. When considering the amount of emissions that could be pumped into the atmosphere from 66 million three wheelers, raising awareness of eMobility and educating influential figures and institutions on the subject is certainly on India's to-do list. 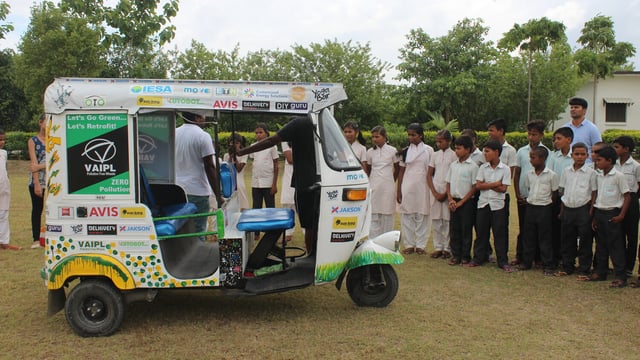 Aside from transport commissioners and political parties, Sushil wanted to reach out to inner-city school students along the way. With India looking to have only electric vehicles on its roads by 2030, there is a huge gap in skill development when it comes to building these EVs—meaning that there needs to be a significant push in terms of R&D. This is something that can be helped by an upcoming generation of eMobility-savvy innovators.

Sushil used his meetings with students and teachers across India as an initial point of contact for suggesting long-term skill development programs that could be made a part of school curriculums. Establishing dedicated courses that require the learning of transferable hard skills is the smart move for a country looking to strengthen its EV industry. The students’ enquiries about the technical workings of the electric rickshaw certainly showed that educating and developing a generation of engineers and pioneers won’t be a problem. However, convincing businesses and municipalities that this is the way to go is something that still needs to be worked on.

2. Electric rickshaws can keep up with their (soon to be) ICE predecessors

Sushil and his team took one of the most recognizable vehicles in India and converted it into an electric, environmentally-friendly machine that matches the original petrol-guzzling three wheeler across the board when it comes to performance.

In two months, Sushil and Volta Automotive India Pvt. Ltd converted a Bajaj 2010 auto rickshaw into a fully-electrified three wheeler. The petrol engine was removed and replaced with a 60V 100Ah lithium-ion battery. Because of the restraints in terms of space, the battery was only big enough to produce these numbers—resulting in roughly 6 kWh of energy storage.

The motor that was used to harness this energy and propel the three wheeler forward was a 3 kWh brushless DC motor. However, Sushil decided to also add a solar panel to the roof of the rickshaw as an extra source of energy—handy for a journey where being able to charge the battery wouldn't be as easy when compared to driving around the more populous areas of India.

Because of the difference in voltage levels between the battery and the solar panel, a customized controller circuit was fitted to match the voltage levels. This was especially important since the varying amount of sunlight could result in inconsistent levels of energy being delivered from the solar panel to the battery—something that could easily damage the hardware.

The electric rickshaw was able to match the original petrol-powered model’s top speed of 55 km/h, and was able to carry the same 400 kg load. Of course, the range offered by the electric model would depend greatly on road conditions and gradient, as well as load and other factors such as weather.

3. The need for EVs is transcendent

The journey around the Golden Quadrilateral started as it meant to go on in terms of raising awareness—the journey was “flagged off” by the transport commissioner for Bangalore, along with a local political party and various media members. 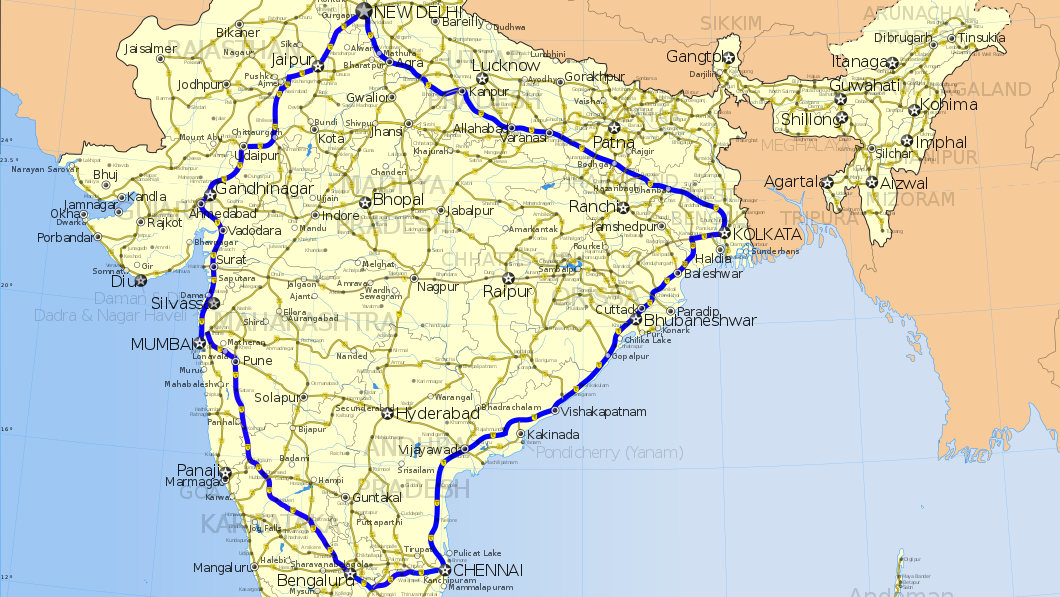 Over the course of 60 days, Sushil and his team travelled around India looking to spread awareness about the potential of EVs to rickshaw drivers, as well as key decision makers. Because of India’s vast array of languages, Sushil’s team was comprised of multi-lingual speakers capable of bringing their message to each region of India. This allowed their mission to be spread more thoroughly—beyond a simple show and tell, and then test-drive.

Generally, communication was much easier to establish in the larger cities as most of the citizens were able to speak Hindi or English. More rural areas, with less widely-spoken tongues, required more extensive communication efforts—though in the end, the electric rickshaw managed to do most of the talking.

4. Electric rickshaws are easy to use (and pretty resilient)

No matter where they went, Sushil and his team received extremely positive feedback in terms of the electric rickshaw’s driveability. With no need for a clutch, and without the hassle of shifting gears, many rickshaw drivers were delighted that they only needed one hand to drive the vehicle.

The conditions experienced on the journey didn’t distract Sushil from sticking to the original plan of raising awareness about the potential of eMobility and the need to cut carbon emissions across the country.

The journey around the Golden Quadrilateral led to interactions with transport commissioners from a variety of cities, as well as other key government figures. Giving key decision makers hard evidence of an electric vehicle that can survive a trip across India, paired with enhanced driveability, was an excellent advertisement for the adoption of electric rickshaws (and EVs in general) across industries in India.

5. eMobility can be adopted quickly by big businesses

Generally speaking, mobility in India can be split into two segments: logistics (e.g. IKEA, Amazon), and cab aggregators (e.g. Uber, Ola)—both also have their fair share of startups. Logistics companies in India already use three wheelers to make up the bulk of their fleets, and when this isn’t the case, these companies are looking to integrate three wheelers into the “last mile” section of the product journey. 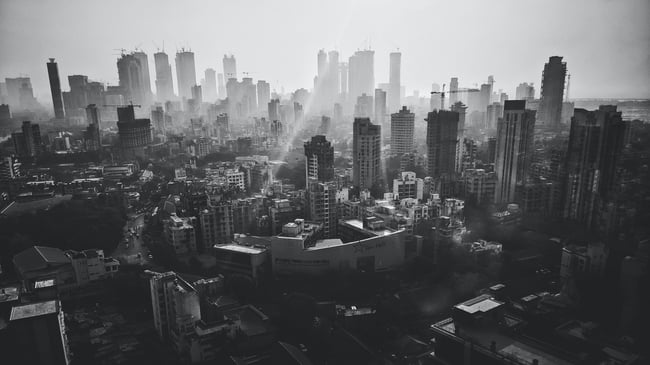 Earlier this year, Amazon announced that they would be deploying 10,000 electric rickshaws across 20 Indian cities by 2025. Though that’s a relatively small number compared to the 66 million three wheelers expected to be on Indian roads by 2050, the 2019 trial period that led Amazon to up the ante and commit to boosting EV use in India shows how other companies can lead by example—and this isn’t limited to India.

Businesses across the world are stepping up their efforts in a bid to adopt electric vehicles and combat a climate crisis that has come about in no small part because of emissions attributed to transport.

What about the rest of the world?

Unfortunately, it’s taken a pandemic to really demonstrate how reducing carbon emissions can help the planet recover from years of environmental neglect. Now is the time to consider what we should continue to do, and what we should cease doing in the “new” normal that will come on the other side of the COVID-19 pandemic. Improvements in the air quality of major global cities has been a topic heavily reported on over the last few weeks and months—an issue known all too well by the billions of people who live in cities across the world.

Essentially, driving home the message that India is currently existing in an unsustainable scenario was Sushil’s priority, while also offering a tangible and testable solution in the form of a converted electric rickshaw transporting him and his team around India. This is a message that should resonate beyond just a single country, industry, or business.

If you're interested in finding out about how to electrify your business, why not take a look at the EV charging solutions on offer? Learning about the solutions that are available is the first step in helping to establish a sustainable future, and developing a more efficient way of working.