The Texas electricity crisis that left more than four million people without power for days amid below-freezing temperatures is forcing the state to rethink its reliance on traditional fossil energy resources like coal, nuclear, and especially natural gas.

But Texans, and all of us facing an increase in extreme weather events as a result of climate change, shouldn’t stop there. The turmoil faced in the nation’s second most-populous state should make us reconsider not just how we heat our homes and keep the lights on, but also the kind of car, SUV, or pickup truck that sits in our driveway. By embracing cleaner transportation solutions like electric vehicles (EVs), consumers can equip themselves to be safer and more self-reliant during the next record-setting disaster.

How EVs can help

Many people think about EVs as a solution for reducing carbon emissions and slowing climate change on a national or global scale. But EVs and their batteries can also solve problems for individuals in their homes, on the road, and in their communities when they lose power from the grid.

Besides gas and electricity woes, many Texans encountered problems at the gas pump during last month’s storm. They pulled into gas stations to find them closed because of the power outages or simply out of fuel. While experts say there’s been no shortage of gasoline in the state, the low temperatures, snow and ice delayed tankers from reaching stations to refuel them.

In contrast, EV drivers with a charged battery were able to get where they needed to go, once the icy roads were safe to navigate.

Most EVs can travel 150 to 250 miles on a single charge, depending on the vehicle model. (Notably, EVs are sold with charging cables that allow them to be charged at home, and most EV drivers are in the habit of maintaining a full or nearly full charge at all times — unlike gas-car drivers who are more likely to wait until they’re low on fuel before visiting the gas station.)

In addition to being more reliable than gas-powered cars and trucks, EVs are safer because they don’t generate carbon emissions, including carbon monoxide (CO). Texans lost power shutting down heaters and furnaces amid temperatures that plummeted to the teens and single digits. Hundreds of them were poisoned by CO after they tried to keep warm by running their gas-engine cars inside their garages or operating portable gas generators indoors.

EVs don’t burn any gas, so they can’t produce CO — meaning that EV drivers and passengers don’t need to worry about the negatives of CO exposure.

What's more, the time is fast approaching when any EV driver will be able to use their EV battery as a safe, zero-emissions backup power source to keep their home warm—transferring stored energy from their vehicle back into their home to power appliances and provide a reserve of energy. 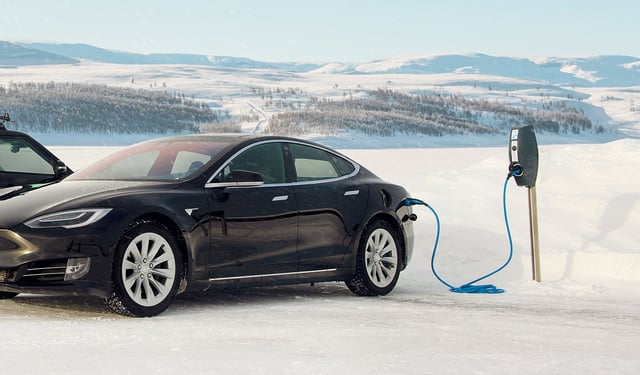 Power for homes and communities

EVs on the market today have battery pack capacities that range from 40 to 100 kilowatt-hours. These kinds of batteries could one day act as back-up generators in your garage, capable of providing power to a home for several days during rolling blackouts or a widespread outage.

As a practical matter, most EV drivers can’t take advantage of this benefit yet, but automakers are working with EV charging companies and utilities to make it a reality. The technology is there—commercialization and deployment are the next step.

Technology is also available to enable states like Texas to aggregate the power stored in any EV battery connected to the grid, from electric buses to personal cars, and draw on it during emergencies to benefit an entire community or region. In this way, EVs could act like mini power plants. The power they generate or reduce, by charging or discharging, could reduce stress on an old electricity grid that is ill-prepared for today’s extreme weather driven by a changing climate. In Texas, this lack of preparation and weather protection resulted in frozen gas wells and a shutdown nuclear reactor, which accounted for most of the outages.

As with EV-to-home power systems, commercialization of EV-to-grid power systems lags behind the technology. Nor is the U.S. electricity grid ready to use EV batteries this way. Nonetheless, some communities are already using EVs to solve power problems for people when grid outages occur.

In Japan, Nissan has partnered with local governments and the private sector to make Leaf vehicles available to restore power in emergencies. In one instance, more than 50 Leafs were used to power community centers in Chiba prefecture, east of Tokyo, after a typhoon knocked out grid power, according to Greentech Media. California is exploring similar models to provide backup power during outages caused by wildfires, when residents rely on their air conditioners to filter unhealthy, smoky air. And electric buses and trucks have huge batteries that can be used to provide backup power to nursing homes during outages.

Such examples demonstrate the power and potential of EVs to help Texas rebuild a more reliable electricity grid and to help all states become more resilient to climate-driven storms and other extreme weather. But first, more people need to drive EVs, and more charging stations need to be installed to serve them.

EVBox, with more than 200,000 charging ports installed in the U.S. and around the world, is helping to build North America’s public charging infrastructure. And automakers like GM and Ford are making huge new investments in mass-market EVs that mainstream drivers can afford—including pickup trucks with powerful batteries that give them higher torque, and therefore bigger towing capacity, than gas-engine pickups.

As these new EVs hit the streets, smart consumers and forward-thinking states will realize they are more than fun to drive and economical—more even than a way to slow climate change today. EVs and their batteries are an important, untapped tool to make people and communities more resilient to the extreme weather in our future.