Smart charging for electric vehicles (EVs) has transformed the way homes and businesses manage their energy usage. At The Current, we think this technology could do with a bit more of an explanation—especially since its future implications will mean big things for energy systems worldwide.

EVs are slowly but surely beginning to rule our roads—and for good reason. As our planet reaches a state of climate emergency, EVs promise everything from reducing harmful air pollution to saving us money.

A smarter way to charge is here

As more EVs hit the roads, the need to charge will only increase. And as more drivers plug in to charge during peak times, chances are that electricity infrastructure could suffer from congestion.

According to a report carried out by L.E.K. Consulting, this is due to what’s known as a "clustering" effect. EV sales data shows that certain suburbs, streets, and locations have a higher proportion of EV ownership—and unless grids are updated, clusters of EVs could potentially overload local electricity infrastructure.

Instead of paying a fortune to reinforce grids, smart charging increases the efficiency of charging infrastructure, while significantly lowering costs. It works by dynamically adjusting the time and speed EVs charge based on the available power capacity—safely balancing a charging station's energy usage with other appliances on site.

Unlike simple 'plug in and charge' stations, smart charging stations can communicate with the grid. By transferring data back and forth, the two systems work to support each other via the site's electrical panel. This allows energy consumption for EV charging to be adjusted depending on user preferences, or the load on the grid.

This connection also allows operators to control their charger(s) remotely from their smartphone or computer. Not only is this convenient, but it also means smart charging features can be continuously upgraded over time. No matter how the industry changes, smart charging will keep up.

What makes smart charging so powerful is its set of intelligent functionalities. While not all smart charging products offer the same features, they all work to stabilize grids and help operators to understand, optimize, and control their energy usage.

Dynamic load balancing, for example, is a function that's key to preventing blackouts. By attaching a smart charging module to an electrical panel, operators can rest assured that they’re using their site’s power capacity as efficiently as possible. The module monitors the total energy consumption of various appliances and balances the distribution of the total available power in real time. This not only protects appliances, but it also ensures EVs are fully charged at the lowest possible cost. 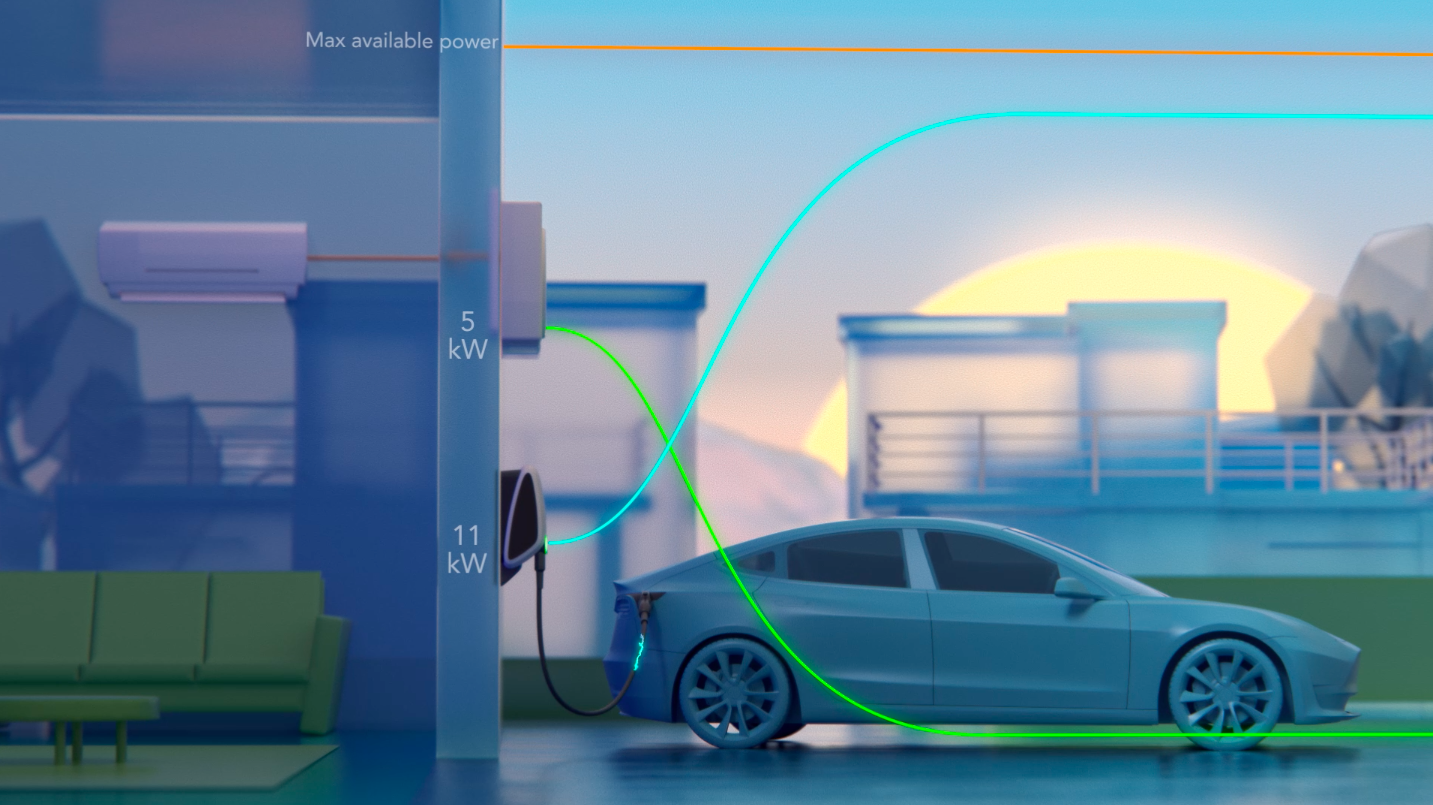 This form of ‘demand response’ also enables homes and businesses to reduce their energy consumption when demand—thus price—for electricity is at its highest. By reducing electricity consumption during these peak times, the cost for powering appliances (and EVs) is much lower. This gives customers peace of mind that they won’t be stung with high demand costs.

Another key feature of smart charging is its ability to harness renewable energy. While it has been proven that EVs emit less CO2 than their gas-guzzling counterparts, clean energy is key to reducing EVs’ carbon footprint even further. By integrating chargers with wind or solar power, homes and businesses can charge their EVs self-sufficiently when there’s an abundance of renewable energy. This makes powering EVs cheaper, cleaner, and puts less pressure on the grids.

Electric cars are capable of more than just transport

Today, most smart charging involves a one-way, or unidirectional, flow of electricity (from the grid to an EV). However, many innovative companies are starting to explore bi-directional charging. Also known as Vehicle-to-Grid (V2G) technology, it enables EVs to both charge and discharge electricity back to the grid.

While still in its infancy, V2G means big things for the future of energy storage. As electric cars spend a great deal of their lifetime parked, V2G puts these big batteries on wheels to use. Not only can EVs send power back to the grid in times of high demand, but they can also serve as back up power sources during power outages.

What’s powerful about V2G is it enables electric cars to store and discharge clean energy. By using this battery storage potential to capture renewable energy, power would be cheaper, grids would be cleared, and an EV's carbon footprint would be even smaller.

Looking ahead, EVs could also potentially deliver grid services on a much larger scale. By pooling together multiple EVs, the combination of batteries could act as emergency power sources for geologically unstable regions. Think Japan, for instance—a country that suffers from regular blackouts due to earthquakes and typhoons.

The technology behind V2G has also laid the foundations for EVs to communicate with more than just grids. Already coined as Vehicle-to-Everything (V2X), this technology would allow EVs to directly power homes and offices as well.

The future is closer than you think

While bidirectional charging may seem futuristic, products that employ these technologies are already here. The major hurdle, however, is getting all of the components—cars, charging stations, homes, buildings, and grids—communicating in the same 'language.'

To solve this problem, a protocol has been developed known as ISO 15118. This international standard determines whether or not a component is grid-friendly, thus V2G-ready.

For smart charging to be the new norm and to unlock bi-directional charging's potential, stakeholders must act now, and act together. All products and processes need to be reshaped with the grid in mind. Only then will all parts work together to transform the health and efficiency of our planet.

Discover some of the most popular electric light commercial vehicles (coming) out in 2022 and learn exactly how long it takes to charge them.

Discover some of the most popular electric cars (coming) out in 2022 and learn exactly how long it takes to charge them.