There’s no doubt mobility will increasingly move away from the internal combustion engine (ICE). However, the direction mobility goes depends on research into new technologies and the speed at which automakers can commercialize vehicles that use them. While battery electric vehicles (EVs) certainly have the edge in today’s market, many experts believe hydrogen fuel cell vehicles also have their place in the future of mobility.

At REVOLUTION Digital #2 last month, we were lucky enough to have the experts behind some of cleantech’s most forward-thinking companies at our fingertips. To find out what tomorrow’s mobility might look like, we asked the experts about the future and how battery EVs and hydrogen fuel cell vehicles fit in. Here are their four predictions from the electrifying debate:

Prediction one: the future is battery-electric

Michael Hajesch is the CEO and Managing Director of Ionity—a Munich-based charging port operator with over 400 charging stations powered by 100 percent renewable energy. With charging stations on major highways across 24 European countries, it’s clear why Hajesch believes electric vehicles are here to stay.

“I would say the future is electric, it’s battery electric. Why? If we look at mobility’s development over the last decade, and what we see today, people can choose from more than 200 models of electric or plug-in hybrids (PHEVs) on the European market.

Prediction two: the future is the best mix

Jorgo Chatzimarkakis is the Secretary General of Hydrogen Europe representing the European industry, national associations, and research centers active in the hydrogen and fuel cell sector. With over 200 members from 31 countries, Hydrogen Europe’s mission is no emissions—in this case from renewably produced hydrogen.

“Well, my statement is surprisingly not ‘the future is just hydrogen’ because the future will be a mix. I think it was always wrong to put both technologies against each other. By the way, hydrogen-electric cars are electric cars. They produce electricity on the vehicle, but with fewer waves. I think this is one of the biggest things. I think every technology has a niche or has an application where it can perform best.

I would never suggest using a hydrogen car in an urban environment where you need less than 40 kWh. If you have more than 40 kWh and you have to travel long distances, then you might look into it. Likewise, I would never suggest using batteries in trucks, because there, 100 km is equal to one tone of battery at the moment. In the hydrogen case, it’s only one kilogram for 400 km. This is where we need to cooperate. The future is the best mix to achieve system efficiency which leads to climate efficiency.” 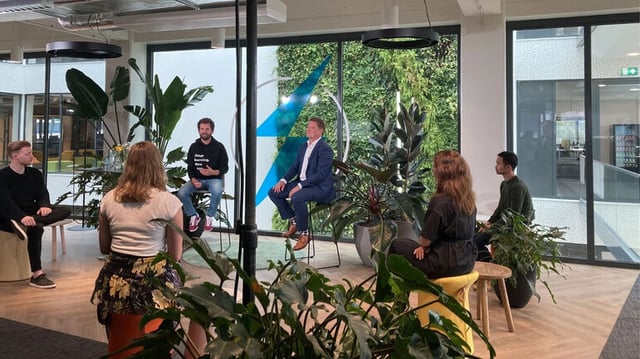 Behind the scenes of the electrifying debate at this year's REVOLUTION Digital #2. On the high stools are Fastned's Michiel Langezaal (left) and Ionity's Michael Hajesch (right). The other panelists, Allego's Mathieu Bonnet and Hydrogen Europe's Jorgo Chatzimarkakis dialled in digitally.

Mathieu Bonnet is the CEO of Allego—one of Europe’s leading providers of charging solutions with over 20,000 sockets across 12 countries. Generating around six million kWh of clean power each month, it’s clear why Bonnet believes clean energy plays a crucial role in the future of mobility.

“Clean energy is key, that’s for sure. Both electricity and hydrogen can bring that too. There might be different technologies to reach this goal so we will see what happens.

Optimizing these things is possible because of digitalization, and for me, digitalization is linked with electricity. So, I don’t know exactly what the future will hold, but I think electric vehicles will be here to stay."

Michiel Langezaal is the CEO and Founder of Fastned offering fast charging stations on highways and in cities across Europe and the UK. Powering electric vehicles with 100 percent solar and wind power, Langezaal firmly believes electric vehicles are the way forward.

“I look at it from a climate change perspective and if I look at that, then you need to look at what’s the most efficient. If you begin with a solar panel on the roof, you put a cable on to it, and you basically connect it to your car, maybe with some power electronics in between, and you charge your battery—on every kWh of solar energy you generate you can drive around 5 km or so.

If you compare that with the efficiency of a hydrogen system, if you were to generate that also with clean energy, so starting with a solar panel, then the kWh of energy—you need to throw half of it away to generate hydrogen. Then you put that hydrogen in a tank, you’re going to compress it, you need to do all kinds of complicated things. Then in the end you’re going to use a fuel cell, and again you throw away half of the energy. Then you have electricity and start driving electric.

For me, hydrogen is something I remember from Thunderbirds Are Go when I was a child. I think it was nice that it was there. But we have far more efficient technology available now and I think we should use it. We, in our generation, need to solve the energy problem, and we need to solve the energy transition and climate change issues. And we need to go electric, there’s just no doubt about it.”

So, which side are you on?

The verdict is in: with three votes going to battery electric vehicles, there’s no doubt they will play a crucial role in mobility’s future. But that doesn’t mean hydrogen won’t play its part. As Chatzimarkakis made clear, the future may just be the best mix of both technologies.

For more valuable insights into the future of mobility, don’t miss the next electrifying debate at REVOLUTION Digital #3 where you can ask questions, take sides, and help spark the conversation. Back on December 8, we're pleased to announce a double edition, this time focusing on Europe and North America. We’ll dive deep into the mobility trends influencing the implementation of sustainable transportation in these two key markets. More info to come but in the meantime, save your spot!

Plus, don't miss the REVOLUTIONARY Pass. Register for REVOLUTION Digital #3 and get a 100€ discount on your REVOLUTION Conference 2021 ticket purchase.

We take a look at Sushil Reddy's trip around India in an electric rickshaw, and discuss what this means for eMobility in India and the rest of the world.