How Volkswagen is committing to an emission-free fleet by 2050

There is a paradigm shift happening at Volkswagen. All brands managed by VW are undergoing a transformation, governance is being realigned, and resources are being redistributed. Committed to the climate goals of the Paris Agreement and operating with a “well below 2°C goal” as a benchmark, VW is working toward the vision of CO2-neutral mobility by making the switch to electric vehicles (EVs).

Why Volkswagen is pushing for CO2-neutral mobility

To understand Volkswagen’s major push for sustainability, it would be best to start by understanding the underlying motives. This chart by the Max Planck Institute for Meteorology shows an ominous forecast for our planet in the year 2090 if the 2°C goal is not kept, versus if it is kept.

During his keynote speech at rEVolution 2019, one of the largest global conferences for the eMobility and cleantech industry, Martin Roemheld, Head of eMobility Services at Volkswagen Brand, elaborated:

“Today, my youngest daughter is three years old. In 2090, she will be 74. I know someone who is currently spilling her breakfast all over herself who might have to live on that planet.”

Roemheld notes that he used to be a “petrol-head.” He loved motorcycles and turning fuel into noise and speed. But there came a time when he realized that he could no longer afford to think in liters. He stepped away from his “petrol-head” ways, started thinking in kilowatt hours, and acquired a position leading electric mobility at Volkswagen, which allows him to help transition mobility from liters into kWh on a large scale.

The transport sector accounts for 14% of global greenhouse emissions, and with parts of the planet on the brink of being unliveable within the next century, there is no more time to lose. Fortunately, Volkswagen’s position as a leader in the automotive industry gives unprecedented influence to make a notable difference. Volkswagen is creating sustainable CO2 optimization measures across the entire lifecycle of their vehicles, from carbon-free production and usage to end-of-life recycling. CO2 avoidance and reduction will occur where possible, and complementary compensation will be introduced in other cases.

“Volkswagen is committed to having an emission-free fleet by 2050,” Roemheld said. “We need to begin now.” Roemheld started in the automotive industry in 2000 and, as he noted, some of the vehicles produced at that time are still on the road today. Moreover, some of the vehicles designed at that time are still being sold. “We’re looking at long time frames to make a change,” Roemheld continued, “And we need to take that time into account when planning for an emission-free fleet. We’re calculating back to stop selling, producing, and developing fuel-based cars in time.

“We need to make a change now,” Roemheld added, “So my little daughter can still run across Germany without it being so hot she has to wear summer clothes all the time.”

How Volkswagen plans to achieve an emission-free fleet by 2050 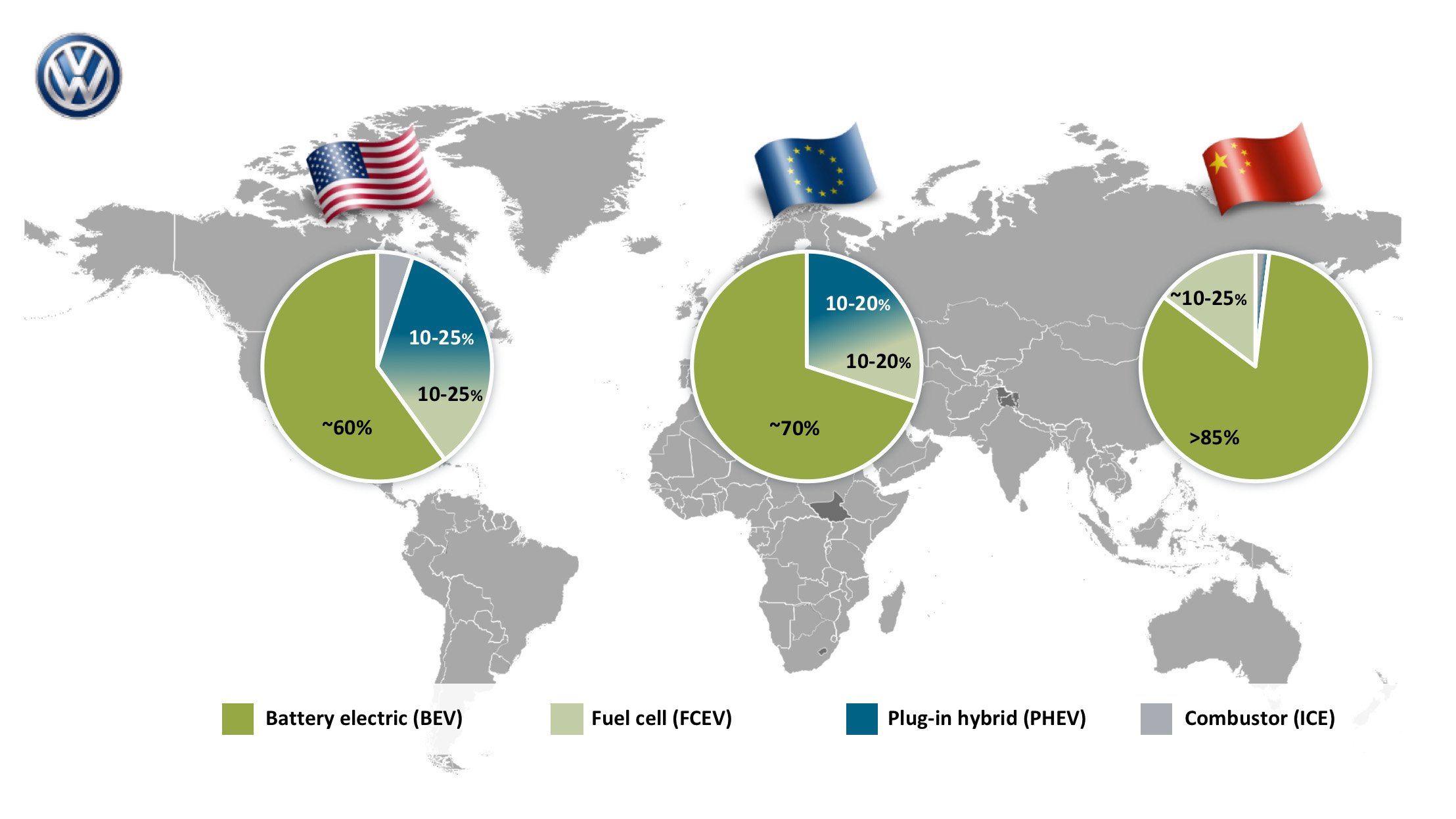 To ensure an emission-free fleet by 2050, Volkswagen aims to achieve an ambitious global drivetrain portfolio by 2040. By then The market is expected to be around 60% battery electric in the US, 70% in the EU, and over 85% in China. The expectation is that there will be a large-scale adoption of electric vehicles across the globe in upcoming years, a trend which VW plans to lead, first through decarbonizing their product portfolio, and then through scaling.

“And if there’s something Volkswagen is good at,” Roemheld adds, “It’s scaling.”

Volkswagen is investing 30 billion Euros into the electrification of the fleet by the year 2050. These vehicles will come at the price of diesel and have a range of 350 to 550km per charge. In 2020, the battery electric, purpose-built, and optimized, the ID. family of vehicles is expected to hit the market. Following that, the VW brand plans to release more than 20  new models of fully electric vehicles by 2025 with expected annual sales of one million units by then.

When asked if dieselgate was the driver for Volkswagen’s adoption of sustainable practices, Roemheld replies that, “Dieselgate was an accelerator, but Volkswagen has been in the electric vehicle market since 2014 and premiered our first trial car in 2011.”

In addition to scaling products, VW is also scaling processes. The company has plans to complete eight production sites purpose-built for electric cars based on the MEB platform, the new modular electric tool kit. Partnerships will be drawn with battery suppliers that run solely on green energy, with the end goal of having all vehicles leave the factory carbon neutral on balance. In situations where the production process cannot be carbon-neutral, VW will compensate by investing in climate protection projects.

“Hundreds of thousands of people work at VW and, along with their families, depend on the success of the company,” Roemheld says. “VW is committed to transferring the success from previous decades on to following decades as well. The Golf of the electric era will be a Volkswagen once again.”

The electric drivetrain is extremely efficient, and its usage can be thought of as scaling decarbonization.

Some points to consider.

Q: How much energy is contained in one liter of diesel?
A: 10 kWh.

In continued positive news, the share of green energy is increasing worldwide. As of today, the global energy mix already makes electric mobility greener than any diesel engine. Bloomberg New Energy Finance projects that the overall share of the sustainable energy supply will be 63% by 2040. The German Federal Government projects that one million electric vehicles to be on German roads by 2022, and that this will increase electricity consumption by a mere 0.5%.

Elli serves customers around their home and within cities. Providing a full package including green energy contract, vehicle, wall box, and service, Elli aims to support the customer in all Home Charging Aspects, including the energy management.

To connect it all, Volkwagen is about to launch a digital charging service known as We Charge, which enables customers to use their car as they do their mobile phones across Europe, with all energy consumption amounting to one bill.

Elli, Ionity, and We Charge will be integrated in the VW car navigation system, which guides drivers to charging ports where they can charge with their contract. While charging, drivers are free to do as they like—go to a restaurant, playground, or shopping mall—while their car charges in the background. There will also be an option to charge with only green energy, guided by the built-in navigation system.

Three major pillars in the electrification of Volkswagen

One of the major barriers to entry for consumer electric vehicles is vehicle cost. Electric cars must be economically attractive for customers to convert. Luckily, the total cost of ownership for electric vehicles is already lower than that of fuel powered vehicles. As of the writing of this piece, one barrel of raw oil costs about $80. A barrel contains 1590 kWh, making one kWh equivalent to five cents. The same amount of kWh through solar energy costs two to three cents.

The benefits of driving electric cars are obvious—it’s easier, quieter, and less polluting. The total cost of ownership is lower, and there are many more opportunities to integrate electric vehicles into smart technologies.

Electric vehicles represent a modern lifestyle and are more integrated into digital lives than any type of vehicle has ever been. Volkswagen aims to create a system that's always online and connected, and seamlessly integrates into daily life.

Volkswagen to become a leader for eMobility

“The core message is that Volkswagen will drive electric mobility from niche to mainstream all over the globe,” Roemheld said. “We will scale and, like clockwork, bring our vehicles to the market with consistent Volkswagen quality. This is what people expect from a company like Volkswagen and we will transfer that knowledge from the fuel to the electric era.”

Plans are firmly in place for VW to become a tech leader for eMobility. The company has the know-how of building products, setting up processes, selling, servicing, and staying in touch with customers. “Volkswagen is going to produce electric vehicles for the millions, not just for millionaires,” Martin concluded.