Despite its straightforward name, a petrol station usually offers a lot more than just a pump for drivers to fill up their tanks. Additional services, such as going through an extensive car wash, ordering a freshly baked sandwich or a hot cup of coffee, taking a (toilet) break, or even doing some modest shopping, are all part of the standard expectations of today’s refilling experience.

Fuel retailers have always found new ways to adjust their services to the ever-changing needs of customers. In turn, it is far from surprising to see more and more fuel retailers adapting to the fast-paced developments of electric mobility by installing EV fast charging stations.

With millions of electric vehicles on the world’s roads today (and counting), the need for a suitable fast-charging infrastructure has never been more prevalent. However, while many fuel retailers would agree that offering EV drivers the possibility to charge their electric car would probably be a great investment for the future, it also sounds expensive and complicated.

Is EV charging really something that fuel retailers should start looking into now? This article explains why petrol stations with EV chargers are attracting more customers today. 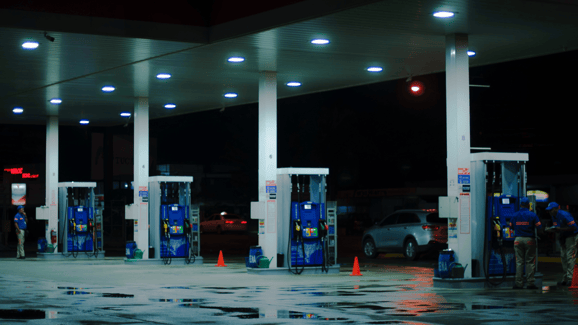 At first, EV charging and petrol stations might sound kind of contradictory; especially when one of the main benefits for EV drivers is that they can charge their vehicle wherever they park and no longer have to be dependent on petrol stations.

However, while the majority of EV drivers do indeed charge their vehicle at home overnight, or at the office during business hours, that doesn’t mean they don’t want to be able to charge it anywhere else.

In fact, our research shows that 36% of EV drivers in the EU already charge their vehicle at petrol stations regularly, and a further one-in-five would love to be able to do so, should the option be available. 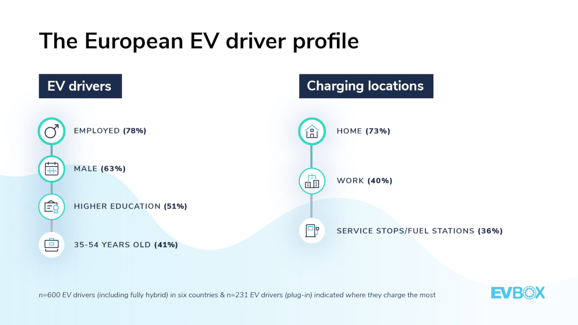 This is especially significant as fully charging an electric car via a regular (AC) charging station—the ones usually found in homes and businesses—usually takes hours. Fast (DC) charging stations, on the other hand, are designed to reduce this time to mere minutes.

These fast commercial chargers are a perfect solution for when drivers are on the road looking for a quick fill-up, and petrol stations at the services are often perfectly positioned to facilitate that need.

When driving a traditional vehicle, drivers will usually fill up their tank when it’s nearly on E, or maybe in preparation before a big trip. A driver won’t just stop at any petrol station to fill it up if there is still plenty of fuel in the tank. However, because electricity is so accessible, charging behaviour differs from traditional fuelling.

Rather, you can compare it to how people charge their phones. Generally speaking, they like to have their phones at 100 percent charge when they start their day, and as long as the percentage is around 70 percent, they’re fine. As soon as that number goes below that though, many of us might start to think about plugging in for a quick charge if the opportunity arises.

Just like their phones—or any other electric device for that matter—people like to have their car battery fully charged. Because range anxiety is only human, EV drivers prefer to charge their vehicle way before it is nearly empty. So when EV drivers spot an EV station while they’re on the road, chances are they will want to make use of that opportunity.

Get discovered by new customers looking to charge

As public charging stations are registered online, it creates a unique opportunity for your business to be found by new customers while they’re on the road or when they map out their long-distance route.

Have a look at the results of the popular Google search term “​electric vehicle charging stations near me​” and see for yourself. Wouldn’t it be nice if that map also featured your business? 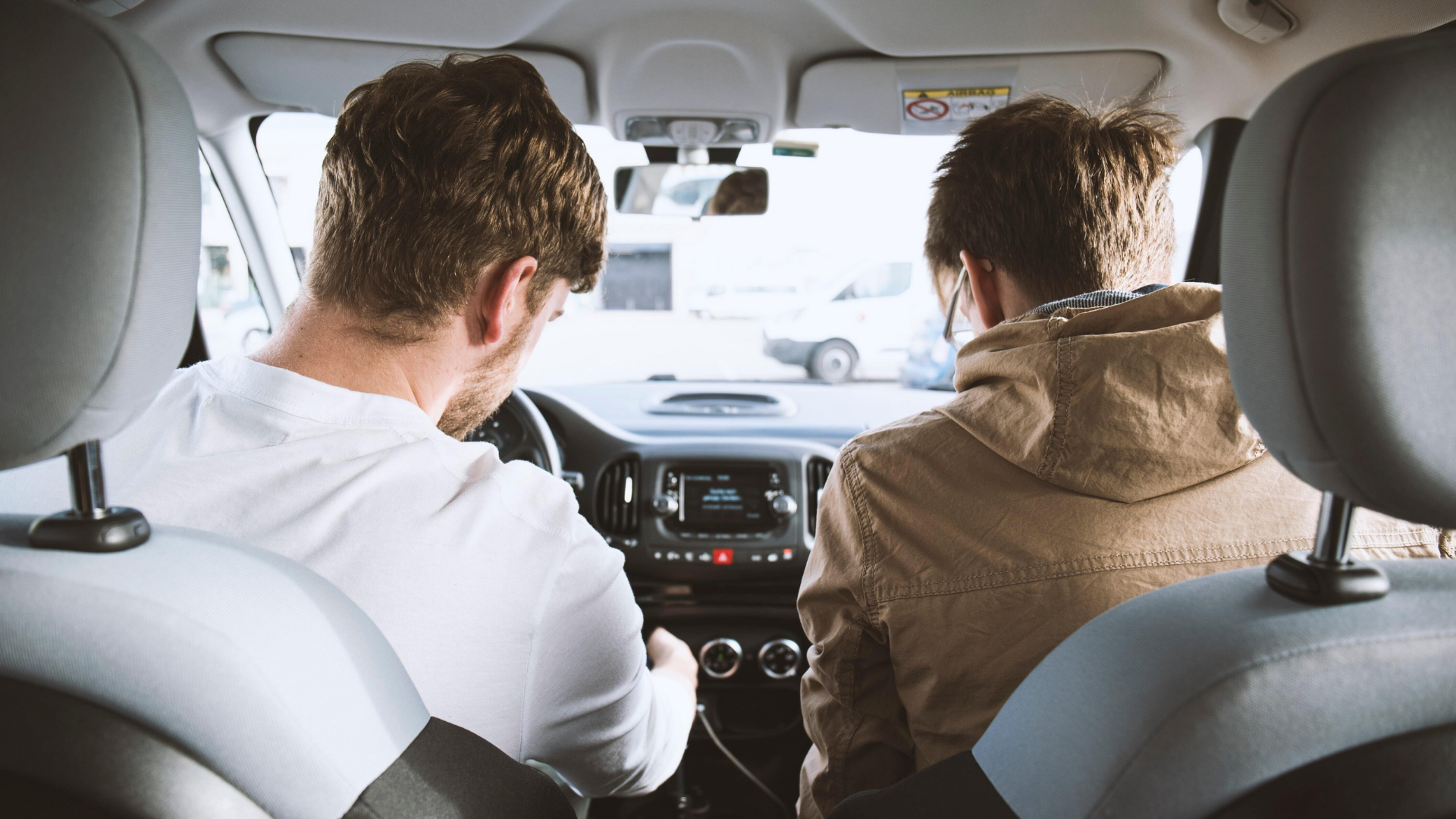 Stand out with EV charging stations

Even though fast charging stations do come in different shapes and sizes, they are generally quite big. What’s important to note here is that this is far from a bad thing. Of course, the bigger size of a fast-charging station is necessary to be able to house higher power outputs required to fast charge, but as an additional benefit the station really stands out (also when cars pass your business at higher speeds). 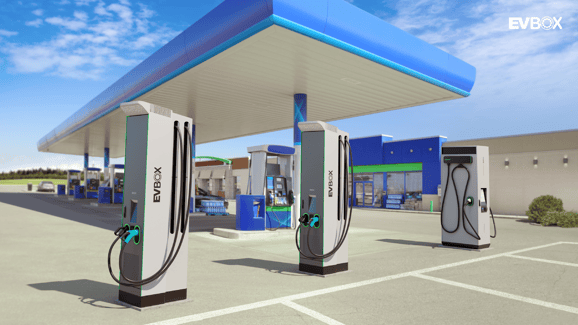 This will not only allow EV drivers to find their way to your business, but it will also attract non-EV drivers. Indeed, installing an EV charging station is more than offering a service, it’s a statement that your business is future-ready and conscious of the fight against climate change.

As the world is facing environmental issues, consumer consciousness is at an all-time high. While various sustainability efforts are top of mind at many governments and organisations, more and more customers seek companies that align with their personal views and values.

Nearly eight in ten consumers surveyed by ​IBM​ indicate sustainability is important to them. Our research shows that about six in ten of the general public (including non-EV drivers) say reducing CO2 emissions in transportation is important to them and approximately two in every three (potential) EV drivers think electric cars are part of the solution to fight climate change.

So, having an electric vehicle charging station at your petrol station is something many of your customers would like to see, even if they don’t (yet) own an electric car themselves.

Your existing customers already drive electric cars (or they might soon)

Do you know that about half of the current EV owners in Europe also still own a vehicle that runs on traditional fuels? Those that can afford it are trying out this new way of transportation before completely letting go of what they’re used to.

This means that, without you knowing, customers that come and fuel up their tank at your pump today, may also own an electric vehicle which they might want to charge at your location should you start offering this option. 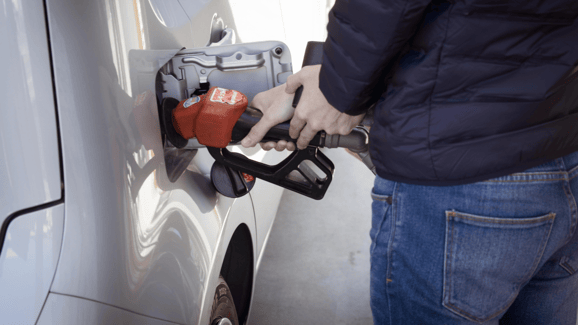 And even if they don’t own an EV yet, chances are that many of your customers are considering it. According to our research, 49% of potential EV drivers have expressed that their fear of not being able to charge wherever they need to, is the main reason for them not to get an electric car. Also, 21% mentions that they won’t get an EV, because they consider the time it takes to charge to be too long.

Now that setting up a suitable fast-charging infrastructure is a top priority for many countries and petrol stations across the globe are tapping into this growing market, we expect these worries to fade soon.

Businesses like yours are helping to shift this perspective, putting the minds of (potential) customers at ease, while growing their offering with a new range of services that meet tomorrow’s needs.